In December 2017, W.A.S.P.successfully completed their “ReIdolized” tour supporting the 25th anniversary of their iconic hit album “The Crimson Idol“, the legendary story of Jonathan Aaron Steele, which will finally be released in a rerecorded version and of the album with the 4 missing songs – as originally intended – together with “The Crimson Idol” movie on DVD and BluRay!

Read more and view the video clip for “Chainsaw Charlie” Taken From „ReIdolized (The Soundtrack to the Crimson Idol)” here at Aardschok.com!

W.A.S.P. now proudly present the first glimpse of the incredible film material that has never been officially released! Check out the video for “Chainsaw Charlie” HERE!

For the first time EVER as originally intended – the film and soundtrack are united and will be released as one special product! The product will also feature 4 additional songs that were intended to be part of the original “The Crimson Idol”.

“ReIdolized (The Soundtrack to the Crimson Idol)” will be released worldwide on February 2nd 2018 via Napalm Records! The following formats can be pre-ordered HERE: 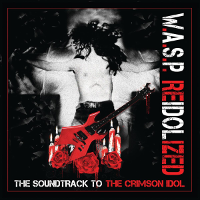 8 The Great Misconceptions of Me